Home » Countries » India » What is Reincarnation in Hinduism?

The Hindu religion believes in cycles of birth and death and transmigration of souls. She believes that only the human body, which is made up of elements, is destroyed at death, while the soul of the body wanders and finds a place in another body. This process continues until the soul is mature and ready to leave the cycle of birth and death. Your karma or your actions and behavior shape your present and future life. 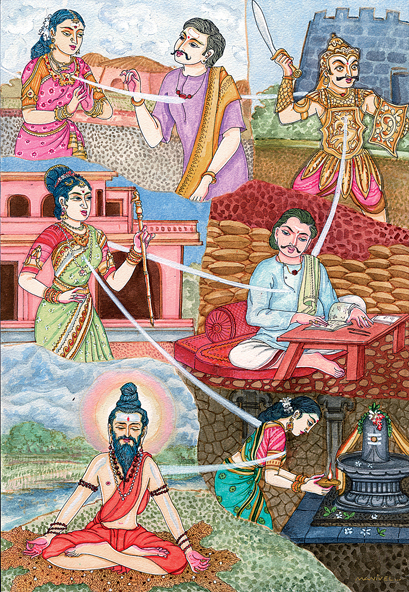 The doctrine of reincarnation in Hinduism is also referred to as transmigration of souls and rebirth. For the scholars, it is as easy as the transition of the soul from one body to another. The soul is imperfect and must move from one body to another until it reaches perfection. Until then, it has to spend time on earth. Only when the immature soul becomes perfect can it expect to reunite with the universal soul or God. This can take several hundred or even thousands of years and the soul invades many bodies and takes the form of a living being. After one body dies, the soul migrates to another body and the process continues until it attains liberation.

The sacred text Bhagavad Gita explains the concept of reincarnation in one of its verses. Translated into English it says: 'Just as a man sheds worn clothes and puts on new ones, so the soul sheds worn bodies and wears new ones.' So the soul wears bodies just as we wear clothes on our bodies. The soul leaves the body when it becomes old and useless and starts looking for a new body. The body that the soul gets after a body is destroyed depends on karma and desires at the last birth.

The soul potential can best be realized in human form

Hinduism believes that a person must endure life on earth and face all suffering in many forms of life. It has to experience everything before it is ready to reunite with the universal soul. According to Hinduism, the soul is present in all forms of life, even in plants and fish. However, the potential of this soul shows itself in different forms of life to different degrees. While this potential is revealed as a human, it remains covered when the soul takes the body of a plant or small insect. The soul is most vigilant when it is inside a person. For this reason, according to Hinduism, one should make conscious efforts to attain nirvana or enlightenment while living as a human.

Your life as a human is not a single event that will be overcome with your death. It only represents a single episode in a long piece. You have to make several appearances on this earth in different life forms until your soul becomes perfect and is ready to unite with the universal soul.