What is resonance structure?

We can draw two or more Lewis structures for some molecules and polyatomic ions without changing the position of the atoms in the structure. In this case, only the electron distribution differs from one structure to another. These structures are called resonance structures or contributing structures . However, the actual molecule has an intermediate structure of these possible Lewis structures.

How to identify the molecules with resonance

Resonance only exists when a Lewis structure has multiple bonds and an adjacent atom with at least one lone pair. The general shape of the response is shown below. Arrows are used to indicate the displacement of electrons from one resonant structure to another.

How to draw resonance structures

Calculate the total number of valence electrons from each atom.

** Look at the -2 charge in the last step (i.e. this molecule has two extra electrons).

If there is more than one type of atom, keep the least electronegative or metallic atom as the central atom.

Carbon is the central atom in the CO 3 2- ion

Combine each atom with a single bond to the central atom by contributing an electron from each atom for the bond. 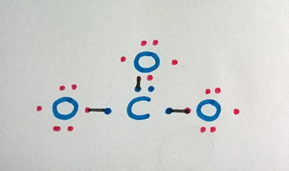 Count the electrons in the valence shell to see if the octet is complete.

If not, add a few more bindings until all of the octets are full.

** Leave the unbound electrons as dots and draw a single line (-) for a single bond and two lines (=) for a double bond.

Now consider the charge -2 (two extra electrons). Since the other oxygen atoms only have 7 electrons in their outermost shell, we can distribute these two electrons between them.

The final structure can be written as follows.

Now we can draw the possible resonance structures as discussed in Section 1.

As above, we can draw three resonance structures for the CO 3 2- ion.

We can use the same procedure outlined above to get the Lewis structure. It has the following structure and has a multiple bond and an adjacent atom with a lone pair of electrons. 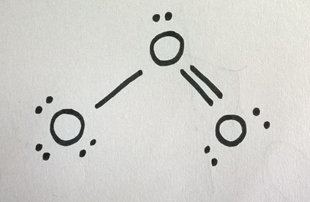 Hence, we can draw resonance structures for the O 3 molecule as follows.

We can get the following resonance structures by following the same steps as described above.

Lewis structure: A simple way of showing the configuration of atoms in a molecule, showing the lone pairs of electrons and the bonds between atoms.